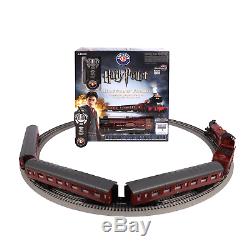 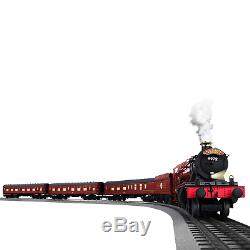 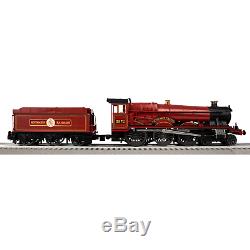 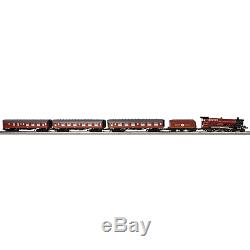 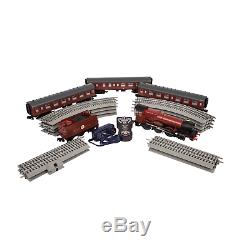 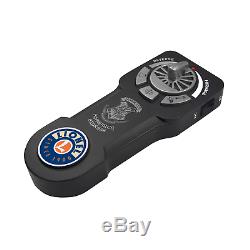 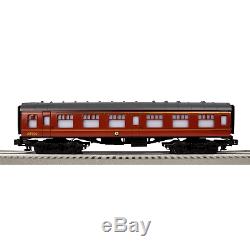 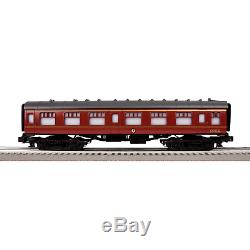 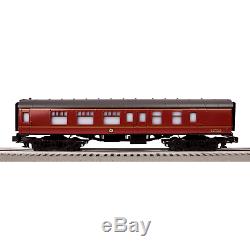 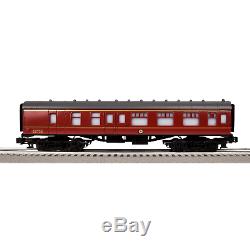 Lionel Trains LionChief Hogwarts Express Ready to Run Train Set with Bluetooth. Pack up your potions books, fold your robes, grab your pet rat and head back to school on the Lionel Trains LionChief Hogwarts Express Bluetooth Train. This set will make you feel like you're sitting side-by-side with Harry, Ron, and Hermione as they prepare for another year of wizarding school. The sound system will even play some of their most iconic lines, along with the infamous, Anything off the trolley?

As it churns down the tracks, this train can even produce puffing smoke to make it extra real that another year of witches, wizards, and all things magic is about to begin. Get back to class without running through Platform 9 3/4 with the Lionel Trains Hogwarts Express!

Head back to school with Harry and friends on the Hogwarts Express. RailSounds RC sound system plays steam chuffing, horns, whistles, and quotes from your favorite characters. Has an operating headlight and puffing smoke for maximum authenticity. Can be controlled with the LionChief remote, or via Bluetooth on the LionChief app. Comes with 2 passenger coaches and 1 combination car. Track includes 8 curved O36 FasTrack sections, 1 10-inch straight lock-on section, 1 terminal section, and 4 straight FasTrack sections.

When Lionel founder Joshua Lionel Cowen's immigrant family arrived in New York after the Civil War, the railroads were literally America's engines of progress. The "Golden Spike" meeting of the Union Pacific and Central Pacific lines in 1869 unified the continent and signaled the birth of a world power. Cowen was born in 1877, just before Edison's first electric light.

He grew up with real trains, amid dizzying change. Around the time he founded Lionel in 1900, passenger lines like the peerless Twentieth Century Limited symbolized American technology and sophistication. Cowen was already a successful inventor when he created his first toy train.

But The Electric Express and its offspring soon became a sacred mission, and Cowen would spend a lifetime stoking America's imagination with the romance of the rails. He told boys that Lionels would prepare them for adulthood. Soon Dads too were encouraged to join Youngsters in model train enthusiasm, to future father-son bonding.

With growing prosperity, Lionel's layouts cropped up in more living rooms, especially at Christmas. Before mid-century, railroads were our economic lifeblood, as well as cultural icons -- but it was not to last. That decade saw the tragic demise of New York's Pennsylvania Station, the retirement of The Twentieth Century Limited, and the passing of Joshua Lionel Cowen. But now the Lionel dream is back and better than ever.

As Lionel looks to the future, it strives to ignite the imaginations and hearts of todays children and adults through continued success with branded and licensed products, an increased presence in the digital space and recapturing its rightful place under the tree. Through partnerships with evergreen brands such as NASCAR, Warner Bros.

Crayola, Coca-Cola, John Deere and many others, Lionel has lined itself up for guaranteed success for many years to come. With innovative products such as the LCS®, iCab, Battle Trains®, Lionel Tracks and a revamped, more user-friendly Lionel. Com, the 115-year-old company has made sure it stays on the cutting-edge of technology. The Lionel name has always been synonymous with Christmas and a train set under every Christmas tree, and now more than ever the companys ensuring that they are a major player in any holiday plans.

For Lionel, the future is indeed bright. Explore a timeline of our history.. Cancelling Your Order: Your order is important to us and will be processed immediately.

Select the reason for the return. The item "Lionel Trains LionChief Hogwarts Express Ready to Run Train Set with Bluetooth" is in sale since Monday, July 29, 2019. This item is in the category "Toys & Hobbies\Wholesale Lots\Model Railroads & Trains". The seller is "vm-express" and is located in Lincoln, Nebraska.

This item can be shipped to United States.