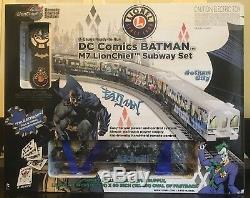 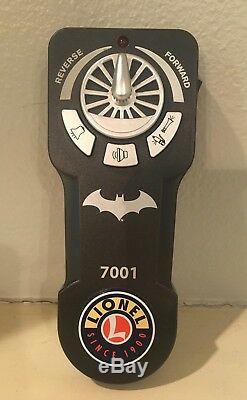 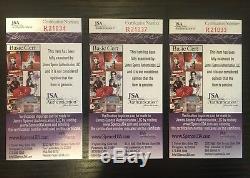 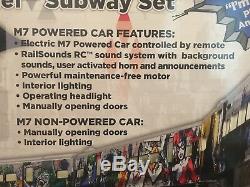 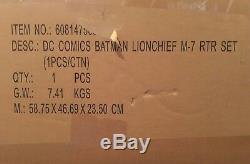 Up for sale is a Batman subway starter set from Lionel. This set is for o-gauge. It's new and was only removed from its box in order to get the cars signed at different comic cons. While it was out of the box, I tested the set briefly to to make sure everything worked well since this is now an expensive set.

The train was only ran briefly so I could test its features, then put back in its box. The train is in excellent condition and the signatures look great.

An awesome item to display in any collection. The signatures have been authenticated and each car has a small sticker on the undercarriage with a serial number that matches the individual COA's that are included with this set. The signatures included are: 1. Neal Adams' signature can be found on each car. Neal Adams is is an American comic book artist known for helping to create some of the definitive modern imagery of the DC Comics characters such as Batman.

He had reestablished Batman's dark, brooding nature and taking the books away from the campy look and feel of the 196668 ABC TV series. Kenvin Conroy's signature can be found on the engine. He is a voice actor best known for his voice role as the DC Comics character Batman on the 1990s Warner Bros. Television series Batman: The Animated Series, as well as various other TV series and feature films in the DC animated universe.

Due to the popularity of his performance as Batman, Conroy went on to voice the character for multiple films under the DC Universe Animated Original Movies banner and various video games, including the acclaimed Batman: Arkham series. David Mazouz's signature can also be found on the engine along with a bat symbol. He has portrayed a young Bruce Wayne in Fox's Gotham, based on the DC Comics alter ego of the superhero Batman. Erin Richards' signature can be found on one of the cars. Erin is best known for portraying Barbara Kean in the television series Gotham.