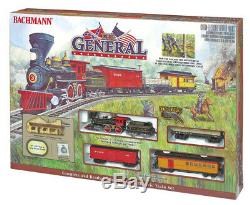 On April 12, 1862, James J. Andrew and a group of Union raiders commandeered the Souths American 4-4-0, named The General, from the Western and Atlantic Railroad. Their daring plan was to sabotage rebel railroad lines deep behind enemy lines. An alert W&ARR conductor, William Fuller, noticed the locomotive moving and with two fellow employees was soon in hot pursuit through the mountains of Northern Georgia. They followed The General on foot until they were able to commandeer another locomotive, The Texas, to continue the chase. After many stops to uproot track and cut telegraph lines, The General ran out of wood fuel and water and was abandoned. Andrews Raiders were later captured outside Chattanooga. Some were able to escape from jail, but eight were hung as spies.

The youngest of the Raiders, 19-year-old Jacob Parrott, was the first soldier awarded the Medal of Honor by Secretary of War Stanton. The General train set lets you experience all the excitement of this historic adventure and comes complete with. 4-4-0 American locomotive with operating headlight and tender old time box car old time gondola old time combine quartermaster and telegraph office building 56" x 38" oval of snap-fit. Including 12 pieces of curved track, 3 pieces of straight track, and 1 plug-in terminal rerailer power pack and speed controller illustrated instruction manual. We carry the entire Bachmann line in all scales G, O, HO, and N.

We also carry the entire line of Williams by Bachmann in O Scale. Ask us for order details.

The item "Bachmann Trains 736 HO Scale Ready to Run Train Set The General" is in sale since Thursday, October 17, 2019. This item is in the category "Toys & Hobbies\Model Railroads & Trains\HO Scale\Starter Sets & Packs".