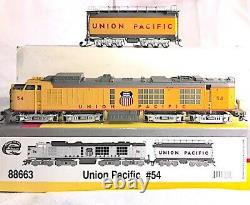 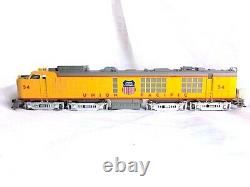 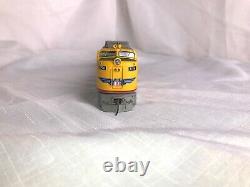 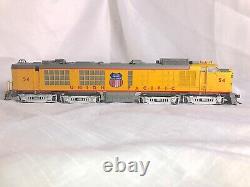 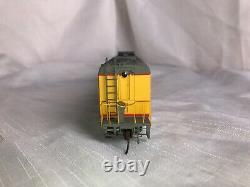 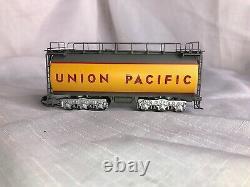 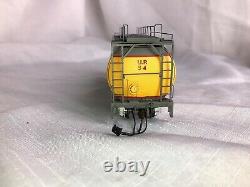 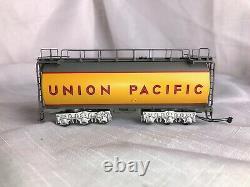 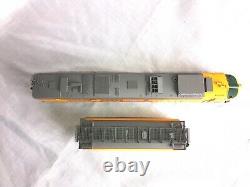 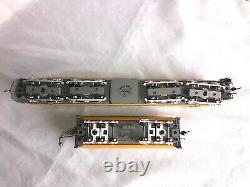 Up for your consideration is a. N Athearn Union Pacific UP GE Gas Turbine and fuel Tender HO scale (Product is Discontinued). Color: Yellow and Gray with Red. Model was quick, smooth and quiet. There is little to no wheel wear. This locomotive set comes from a collection, destined for a layout, which never materialized. This is one of my favorite model types. I hate to part with it.

My loss is your gain! Locomotive was stored in a clean, dry, pet free and smoke free environment. Original Box: Yes Box show little to no shelf wear. Actual model has prototypically accurate silver trucks. Fully assembled and ready for your layout or display.

McHenry scale knuckle spring couplers installed. After World War II, GE began work on a locomotive using a gas turbine power plant specifically designed for locomotive usage. The gas turbine had an advantage in that it could burn Bunker C fuel oil. Bunker C is a thick, low-grade oil that is a left-over when crude oil is refined into higher quality products like gasoline and diesel fuel.

Being a residual of the refining process, it was both very cheap and widely available. GEs locomotive gas turbine was about 20 feet long and created 4,500 horsepower, three times as much as a contemporary diesel. GEs test-bed and demonstrator gas turbine locomotive was completed in November 1948. UPs first gas turbine, numbered 51 and part of a ten locomotive order, was received at the Omaha shops on January 28, 1952. It had a full car body and a single cab.

Numbered 61 though 75, the second order eliminated the side air intakes. In their place was a covered walkway along both sides of the locomotive, giving them the nickname of Verandas. Like the standard turbines, each Veranda turbine carried 7,200 gallons of fuel oil and 1,000 gallons of diesel fuel. In addition to the gas turbine, there was also a 250 horsepower diesel engine. The diesel was used to move the locomotive around yards, power the auxiliaries, and crank the turbine.

Each locomotive weighed 551,720 pounds and was just over 83 feet long and stood 15 feet six inches tall. They rode on two sets of span-bolster AAR Type B trucks with a wheel arraignment of B+B-B+B. The gear ratio of 74-18 gave a maximum speed of 65 miles per hour and a starting tractive effort of 137,930 pounds. Like contemporary diesels, the gas turbines were equipped with dynamic brakes. In October 1955, number 61 was the first 4,500 horsepower turbine to receive a 22,000 gallon fuel tender. The original assignment for the Veranda gas turbines was Ogden, Utah to Cheyenne, Wyoming. With the addition of the tenders, they could run between Ogden and Council Bluffs, Iowa, without refueling.

That remained their normal operating range for the rest of their careers. The first five Veranda turbines were retired on August 31, 1963.